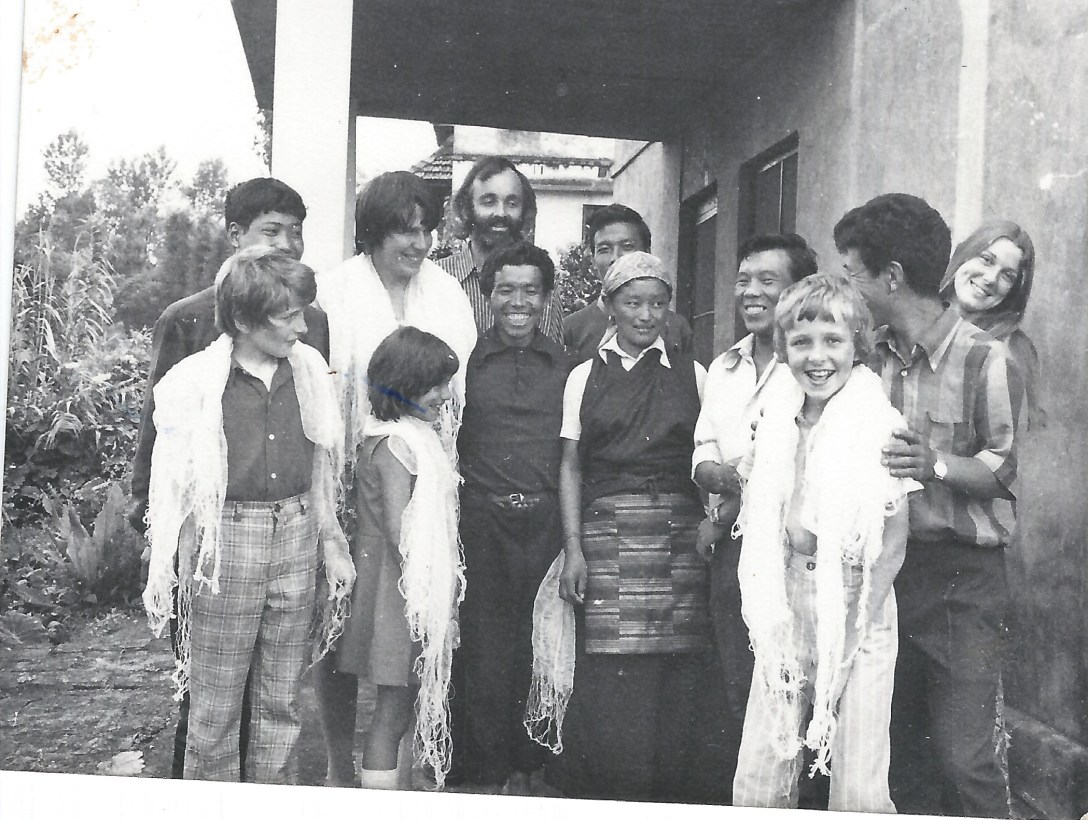 In August 1975 our family flew to Kathmandu to visit my uncle, Andrew Quarmby, an aid worker and film-maker, his wife Diana and our cousin Sarah. Andrew and my dad, Michael, had been keen walkers since their days growing up in hill-country in Yorkshire, as sons of farmers. Now they wanted to take all of us on a trail that was only just unfolding – all the way to the village of Kunde, near Khumjung, nestled just a few miles below Everest Base Camp. My dad and uncle were to walk on to Base Camp, whilst the rest of us stayed there.

We had moved to the flattest of counties, Norfolk, when my dad got a headship there, a year or so earlier. This made training for walking in the Himalayas a little tricky. There was one slope, which my mum and dad thought would do. We would trek up and down it, twenty or thirty times after school, and if we did well we would be given Maryland cookies as a reward. We had to save our money (our parents were teachers, so didn’t have a lot of cash) so we had very small baths for many months before the big trip. We took with us a lot of Beanfeast dried food (mmm) and dried porridge. (This later became my moment of triumph, as a porridge refusenik. As I rejected it, near starvation, consistently, every day on a 20 mile trek in the Himalayas, I was eventually allowed to bow out of daily porridge at home when we returned. I have never eaten it since.)

We arrived in Kathmandu in summer 1975 – monsoon season. We were staying with Andrew and Diana, and their housekeepers, Nema and Pemba, who were Sherpas. They were to accompany us on our travels to Khunde and Khumjung, and hired other Sherpas to come with us as well. I loved Nema and Pemba, who became real friends to us, as they were to Andrew, Diana and Sarah. I don’t remember when we set out from Kathmandu, but I remember that we walked around 20 miles a day. I was nine years old, and my cousin Sarah, only seven. My brothers were just a few years older. Sarah, the youngest, never complained and like me, was only ever carried across rivers where the current was too strong for us to ford. I can still remember Sherpas fording them for us with a rope and then my dad and Andrew and the boys using the rope to guide themselves across. I remember one day, my foot covered in blisters, feeling too sore to carry on, on a high mountain track, and stopping with my dad. I don’t know how long we were on our own, as the others walked on, but I was grateful for that time he spent with me, when I just couldn’t walk any further.

Then there were the leeches, which sucked our blood, voraciously. My mum, being close to a Buddhist, would let them take their fill and drop off. The Sherpas would touch them with a cigarette and watch them drop off. My brother John, now a doctor, would watch them approach him, half horrified, half fascinated. My brother Chris, who was always hungry, was particularly interested in explorer Chris Bonington’s expedition, hurrying along ahead of us, and dropping Spangles wrappers as it went. Sometimes he would catch them up and beg them for food. There were a few bad days when ‘our’ Sherpas went on strike as Chris Bonington was paying ‘his’ Sherpas more, apparently. It all got sorted out, but even then, money and fair conditions were an issue. As of course they should be.

Which brings us on to the wonderful, evocative film Sherpa, which is rightly nominated for a Bafta (winners to be announced on 14 February). This beautifully shot and observed film gives Sherpas back their rightful place in Nepalese history and culture, centering on the 2014 climbing season, from the Sherpa point of view. That sharpened when an avalanche down Everest’s Khumbu’s Icefall killed 16 Sherpas. The government reaction (at first) was inadequate – even pitiful. The film also discussed the confrontation the year before between Sherpas and climbers and went back in time to the first ever ascent of Everest (at least by a Westerner with a Sherpa) in 1953, by Tenzing Norgay and Edmund Hillary. We don’t seem to have matured much since then. I certainly felt, at the film’s end, that we in the West need to step back from our interest in ‘conquering’ Everest, or Chomolungma as the Sherpas call it, and ask ourselves why some think they need to get to the top – especially when it means risking lives. Why can’t tourism be more sustainable? Why can’t there be more treks in the Himalayas that don’t go all the way to the top? Why do the tour guides refer to Sherpas as ‘boys’ – which certainly resonated to me, and not in a good way – with one person who had been paid to get to the top even asking about why a tour organiser couldn’t speak to the ‘owner’ of a supposed trouble-maker?

I realise, looking back, how lucky we were to have an uncle and parents who didn’t have money, but who did give us the opportunity to trek in the Himalayas as children, albeit on Beanfeast and local food, rather than shelling out £50,000 for an organised tour. I still remember so much of what we did – playing for hours with local children in Kunde, with bits of film rejected from the local hospital, staying in local houses where the smoke got in your eyes, eating chickens that you had seen killed just a few hours earlier, drinking the local salty tea, the beautiful local temples and prayer flags and the lush green scenery that always, always hid a leech. My dad and uncle never made it to Everest Base Camp – my uncle developed malaria. They got within sight of it, and then they turned back, and my dad helped his younger brother off the mountain, as he sickened. They both made it down alive.

Sherpa deserves to win a Bafta, because it treats the Nepalese people with respect and it sets Everest and those who want to climb in a wider, more universal context. The struggle the Sherpas are going through to determine their destiny is mirrored in other struggles around the world.  This beautifully crafted film captures the perplexity of so many of us in the West when we are faced with old stereotypes – ‘happy smiling Sherpas’, as one organiser put it, falling away and being replaced by reality – Sherpas demanding what we demand for ourselves – respect.