This week I was lucky enough to join Ken Titmuss, an expert in old maps who runs London walking tours, on one of his outings in Vauxhall. Ken, a former community worker, really knows his stuff, although he wears his knowledge lightly. I met Ken, along with some charming German students at the local station. He gave us copies of four old maps of the area, in covers, for us to refer back to as we walked around the area.

We circled around what was left of the Pleasure Gardens (now a well-used park, with a fine tea house at one corner). Ken explained the history of the Gardens, and then we struck out a little further, finding traces of the Royal Doulton tile factory, an old school and the former graveyard, amongst other treasures such as tucked away Georgian houses. 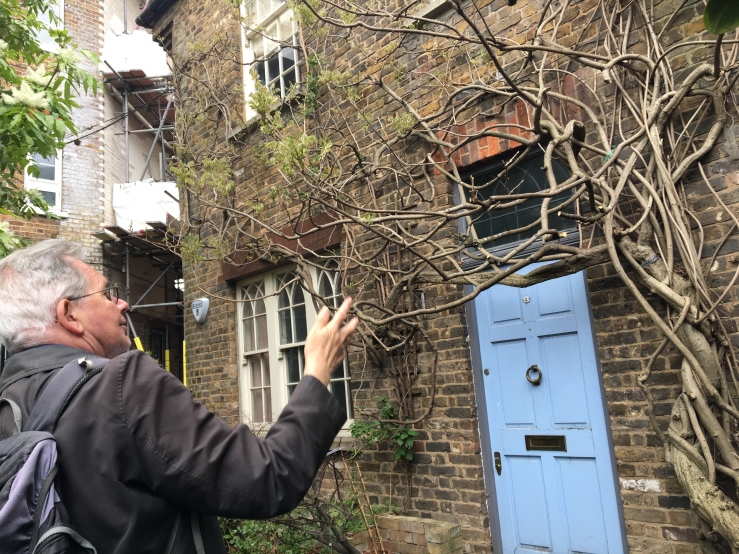 I was there because I wanted to get a better feel for the second third of the book I am writing at the moment, about two young girls, in Georgian times, and their precarious life in London before being transported to Australia in the 1820’s. The first third is set in Norfolk. I know the South Norfolk landscape well; I’ve walked it many times with my parents. I’ve seen the seasons come and go; I’ve heard the birds sing, and watched them out hunting. I’ve been to the great church below, in Redenhall, many times, and know its place in the landscape and in the hearts of the people about whose ancestors I am writing. I’ve swum in the slow, local river, taken boats out on it. The heft of the landscape is within me and so although I’m going back in time, some 200 years, I feel at ease with it.

Now I have to go through the same process with London, and it’s so much harder because of the multiple descriptions by other writers. I have to peel them away and find my own voice, in a landscape that has been so well conjured by others.

So having a guide who can walk you through history is useful. Ken brought Vauxhall to life, but he was also kind enough, at the end of the walk, to go with me to what remains of the Millbank Penitentiary to identify parts of the outer wall that remain.

We walked round the vast footprint of the building as it was, through social housing and around Tate Britain, which sits on its foundations. This forbidding structure would have dominated the riverside when the two girls lived in London. They were intimately acquainted with the Penitentiary, having spent some years inside it before being transferred, with marsh fever, to the hulks. Their life in the London was typical of that of poor young women – life in and out of institutions, on the streets, before they were transported. My task is to breathe life into their voices, as their lives are currently mediated and communicated by those who disparage them. It’s about raising the dead from paper, and hearing them speak back, in the landscapes that formed them.

Oh, and if you want to join Ken on one of his excellent walks, he can be contacted through his website on on Twitter @oldmapman.